Heroes of the Storm Panel Recaps at BlizzCon 2013

Game Director Dustin Browder, Art Director Sam Didier, Production Director Chris Sigaty, and Lead Engineer Alan Dabiri gathered together on Friday to share some of their thoughts on Heroes of the Storm. They began by describing three of the team's core focuses when it comes to developing Heroes of the Storm:

Heroes of the Storm has its roots in Blizzard communities. The editor tools, engine, art, and models we offered with our games were a great jumping off point for map developers. Players went crazy with the tools available to them and the map developer community exploded -especially with the release of Warcraft III. Players managed to kick off custom games, such as Tower Defense and Defense of the Ancients, which grew so popular that they developed into entirely new genres. 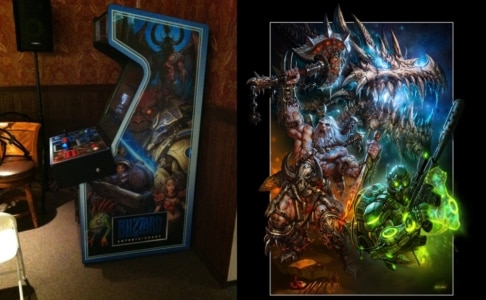 After the release of StarCraft II: Wings of Liberty in 2010, we wanted to demonstrate what was possible with the StarCraft II Editor at BlizzCon by creating the game that would eventually become Heroes of the Storm. After returning from the convention, we found inspiration in things around the office. Things like BlizzCon posters and an arcade cabinet that showed off art mash-ups of Blizzard characters from all three franchises. These items, along with the convention itself, helped us realize that what we wanted to create was BlizzCon: The Game.

We’re frequently asked if it’s difficult to make StarCraft, Warcraft, and Diablo all fit into the same game. However, once we took the art styles from these games and applied each of them to Heroes of the Storm, we felt they fit very well together. Blizzard characters have quite a bit of depth and lore behind them and we want to be sure that each hero lives up to players’ expectations when they dive in to the game. For example, many artistic concepts for Arthas developed over the years, which allowed us to pick and choose some of our favorite elements and apply them to his flavor in Heroes. 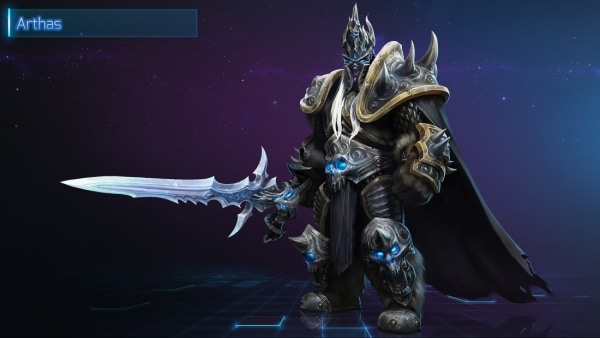 On the design side, we want Arthas to measure up to his stature from the lore. We want to make sure he’s really tough, but still able to hunt down enemies as well. We’re also working with the concept that you can choose your own heroic ability. Part of the reason we’re doing this is because a character like Arthas has so much depth that it can be hard to restrict him to just one set of abilities. We want to offer you choices so that you can play your favorite heroes in a way that fits your playstyle. 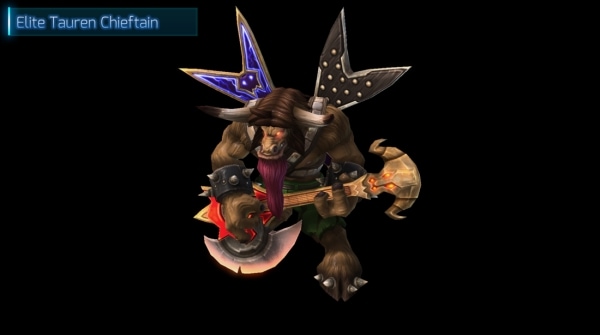 ETC is based on the band Elite Tauren Chieftain that plays at BlizzCon, and also appears in World of Warcraft (the panel included Alan Dabiri, Chris Sigaty, and Sam Didier, all of whom happen to be members of the band.) Heroes of the Storm is a game that wants to capture the deep mythology of Blizzard universes while maintaining a sense of humor. We think ETC is a hero that captures this spirit quite well. ETC is a Warrior like Arthas, but his high mobility and capacity to self-heal allow him to leap into the fray with surprising speed and stick around to see a battle to its end.

Arthas and ETC are both Warrior heroes but they’re very different in playstyle as well as flavor. This is one of our big goals when it comes to creating heroes for this game. We want the art and design for every hero to feel unique and special when you get your hands on them in-game. 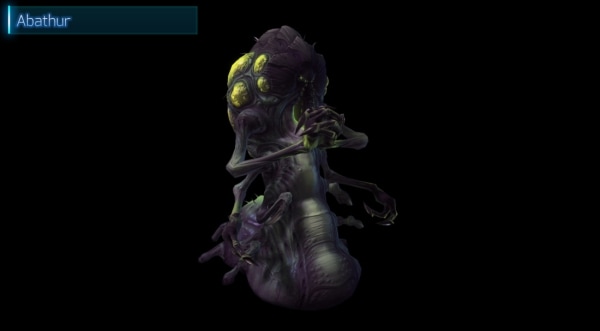 Abathur is a new type of hero that won't be found in the thick of a fight himself. Instead, he’s behind the scenes, manipulating the battlefield a little bit at a time in many places. In doing so, he can help his team secure big advantages and shape the flow of battle. Let's take a look at a couple of his abilities that we feel make him so unique.

The opportunity to create new skins is very exciting for the team and allows us to pack even more flavor into our heroes. Skins also let us see what heroes might look like if they crossed into one of our other game universes and allow us to experiment by offering a more lighthearted take on a hero. The possibilities are endless, and you can catch a preview of some of the skins we’re considering at the end of this article. 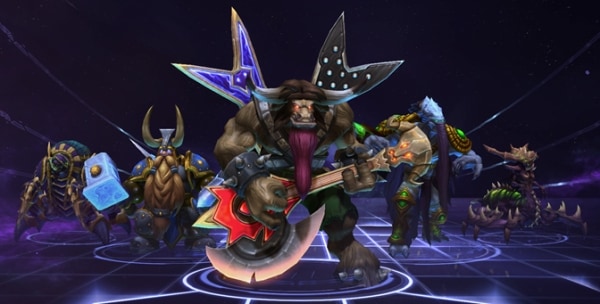 One of the values that’s most important to us with Heroes of the Storm centers on having fun with your friends when you jump into the game. We want you and your buddies to have a blast together and we're focusing on several areas to help accomplish this goal: 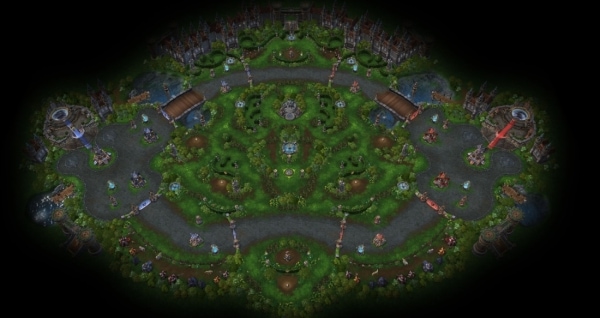 Battle Grounds and map objectives are areas where we're really trying to push the boundaries in not just Heroes of the Storm, but the genre as well. When we started thinking about Battle Grounds for Heroes, we looked back to our experience with designing the Wings of Liberty campaign, and player requests for campaign mission mechanics on multiplayer maps. While these mechanics didn’t feel quite right for the StarCraft multiplayer experience, we felt that Heroes could make use of this idea to offer players many great opportunities for new gameplay experiences. 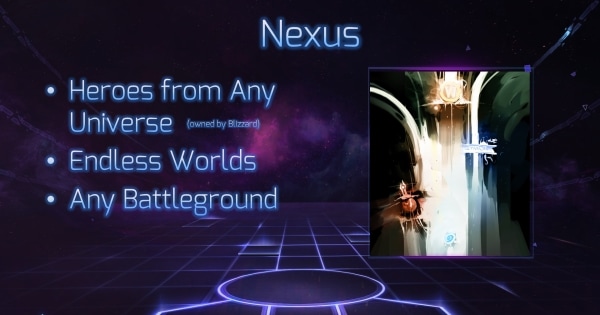 We also wanted to develop a place where it wouldn’t feel strange to see all of Blizzard’s universes collide on these Battle Grounds. In Heroes of the Storm, that place is the Nexus. We know many of our characters have deep lore behind them, and the Nexus represents a space where anything can happen.

The panelists went on to discuss the Blackheart’s Bay and Haunted Mines Battle Grounds before closing out the panel with a short animated video by Jonathan Burton of Carbot Animations. You can find more information on Battle Grounds in the Heroes of the Storm Deep Dive Panel recap below.

Heroes of the Storm developers Matt Cooper, Richard Khoo, and Alex Sun of the Game Design team got together with 3D Artists Phill Gonzales and Brian Sousa to take a closer look at Heroes in the Deep Dive Panel.

Richard Khoo got the ball rolling by describing how the collision of Blizzard universes in Heroes of the Storm offers plenty of creative freedom for the development team. Phill Gonzales went on to detail how the art team combined the attention to detail of the Diablo art style, bold shapes and colors of Warcraft, and grittiness of StarCraft to create a brand new, yet familiar art style in which all of the heroes seemed to belong together.

This artistic direction created the need for a place where all of these heroes could collide in-game. Blizzard franchises have many established worlds where these battles could take place, but the more the team considered it, the more they wanted to offer Heroes of the Storm players a new world that they could explore and experience. With this in mind, the Nexus was born as a massive collision of all Blizzard universes in which heroes clash on the Battle Grounds within 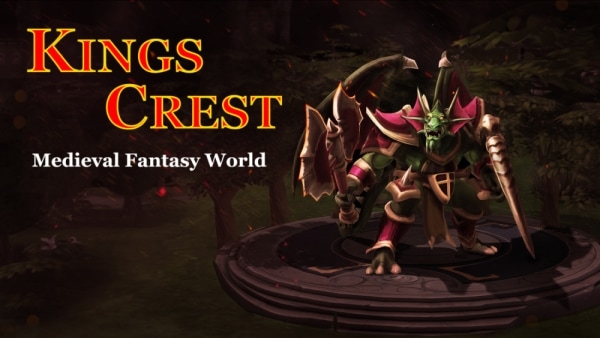 Kings Crest is one of our first concepts within the Nexus. It’s steeped in a classical fantasy setting that we wanted to feel familiar, yet still stand apart from the Warcraft universe. Kings Crest features a heavy medieval theme set within a verdant, lush environment, and every bit of the artwork is meant to fit these motifs. Having a new setting such as this meant that concepts like minions, mercenaries, structures, and objectives could all be created from scratch and be completely unique to Heroes of the Storm.

Each team is given a number of Fortifications on their half of a Battle Ground to help them defend against enemy players, minions, and mercenaries. Forts are made up from a collection of several structure types:

Mercenary Camps feature neutral monsters that, once defeated, will join the fight for your team by entering a lane and laying waste to enemy minions, heroes, and fortifications. In terms of appearance, we want mercenaries like Siege Giants and Knights to look consistent across all Battle Grounds so that they’re easily recognizable, but still fit with each Battle Ground’s art style through small changes to their themes.

We had lots of great ideas for Kings Crest, which was quickly becoming a large, immersive world. We realized we needed to branch out to other Battle Grounds and looked to different areas of Kings Crest that inspired us. One such area was the docks, which later became Blackheart’s Bay. 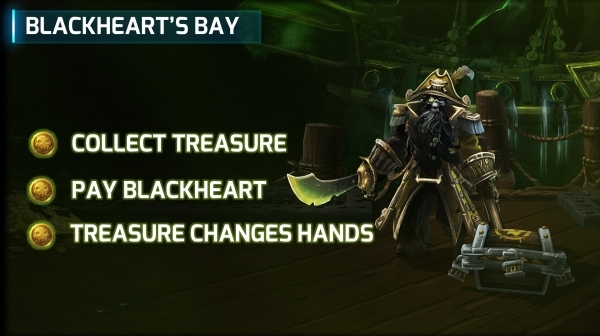 While the art style of Blackheart’s Bay still has Kings Crest elements at its core, this Battle Ground was created to fit a nautical aesthetic, and features a Ghost Pirate Ship as its center piece. The art and design teams collaborated closely to develop Blackheart’s Bay and its mechanics. 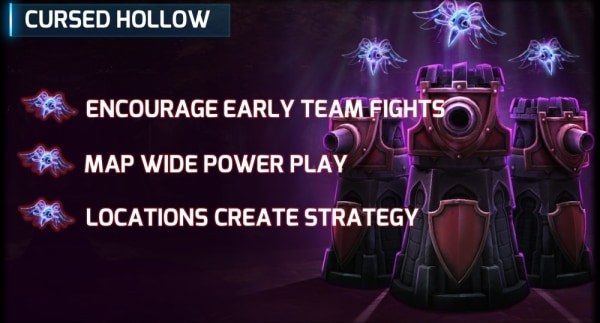 The Cursed Hollow Battle Ground is set within the Raven Lord’s domain on the outskirts of Kings Crest. Cursed Hollow features autumn harvest and raven motifs which make for a very spooky, somber play environment. 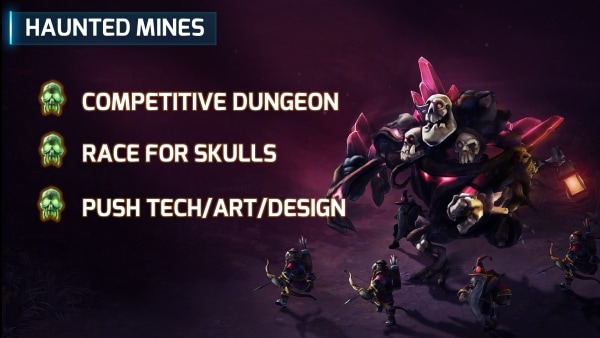 The Haunted Mines is a multi-layered Battle Ground that offers a unique, compelling experience when players venture into the mines below. This Battle Ground borrows heavily from the Cursed Hollow tileset, but has its own flavor through the art and design of the mines.

The panelists then discussed the team's philosophies on hero design and presented a few of the questions the team considers whenever they go through the process of developing a new hero.

Stitches is a hero whose origins date back to Warcraft III, when undead Abominations first made their appearance. Stitches eventually found his way into World of Warcraft and was one of the first characters we adapted for Heroes of the Storm. Here’s a look at a few of his abilities.

James Raynor is an iconic hero from the StarCraft universe who is the charismatic leader of Raynor’s Raiders and has a storied rebellious streak. Raynor was designed to be an easy-to-learn hero for beginning players.

Lead from the Front

Tyrael is the angel of justice from the Diablo universe who is thematically a very strong leader and ally. He’s a tough hero who can be the ultimate initiator, or use his abilities to protect his team mates.

While our heroes are individually great, they shine brightest when they come together as a team and one of the most fun ways to play Heroes of the Storm is to jump in with your friends. We want you and your friends to be able to select you favorite heroes every time you play, and we’re accomplishing this by allowing you to select your heroes before you queue up.

We think playing in a team is so important that we also want to reward you when you do so. When you play in a party, you’ll earn experience in the out-of-game leveling system more quickly, thus allowing you to level up faster. By leveling up, you’ll also unlock rewards such as new talents so that you can customize your hero to fit your playstyle. Furthermore, you’ll also unlock new game modes and fun cosmetic rewards like skins and mounts.

Mounts can be used to increase your hero’s movement speed and while they add cosmetic customization to Heroes of the Storm, they also add a lot to gameplay. Players can access their mounts at level one, and they increase in speed over the course of a game.

Further still, mounts allow players to quickly traverse the Battle Ground and offer teams a method to quickly gather together as they ride into combat.

Skins are something we’re very excited about, and it’s really fun coming up with new ideas for our heroes. We’ve got a ton of concepts already, and skins allow us to explore all kinds of options. Below, you can catch a glimpse at a few of the skins previewed during the panel.