On Friday, Hall B at the Anaheim Convention Center was filled with Heroes of the Storm players and fans. Cheers and applause erupted near the stage as HeroesHearth Esports and Team Liquid wrapped up a tense game one—but Miracle’s Jeong "Frankle" Jae-Yeop was focused elsewhere. He had stepped away from his own HGC Finals preparation to get his hands on the Nexus’ newest hero, Orphea.

The Heir of Raven Court, Orphea is the first of Heroes of the Storm’s roster born entirely of the Nexus. This new path for heroes who wish to join the fray is exciting to Frankle. “Heroes of the Storm is my first Blizzard game,” he said. “I don’t know much about the other franchises.”

As they were seated in the demo area, the other nine players could not have known they were playing with or against a legendary Assassin player—a consummate pro who’s twice helped his team take down defending HGC Finals Champions Gen.G in 2018’s Phase 2. For his first game with Orphea, Frankle leaned into talents that bolstered the hero’s Q ability: Shadow Waltz. When hitting an enemy with this attack, its cooldown is set to two seconds and Orphea can dash a short distance.

“If you are really good at skillshots, Shadow Waltz is going to be very useful because you can use another Q after two seconds and keep setting yourself up in a better position,” Frankle said.

A Feast for the Ages

About six minutes into his first game with the hero, Frankle became more comfortable with Orphea, positioning himself aggressively and finishing off foes left and right. At Level 10, Frankle picked the Heroic ability Eternal Feast, an attack that strikes a large zone and repeats each second if an enemy hero is hit. He tested it out by himself against four enemy heroes, and while he didn’t escape with his life, the ability struck more than ten times, sapping the opposing team’s health.

“I was very interested in it after seeing it in the video earlier today,” Frankle explained. “The area-of-effect is very good.”

Once things clicked, there was no stopping Frankle and his pick-up team of BlizzCon attendees. He consistently used Orphea’s E ability, Dread, to slow enemies and chase them out of their lane. Frankle’s team won their demo game and—perhaps unsurprisingly—he topped the leaderboard in damage, walking away from his playtest eager to utilize this new Assassin.

“I really like her Shadow Waltz because you can use it to avoid enemy heroes,” Frankle said. “I think she is going to be a very good hero because she can be very annoying as a mage, especially to heroes in the same lane as her. But I need to play more so I can better understand her.” 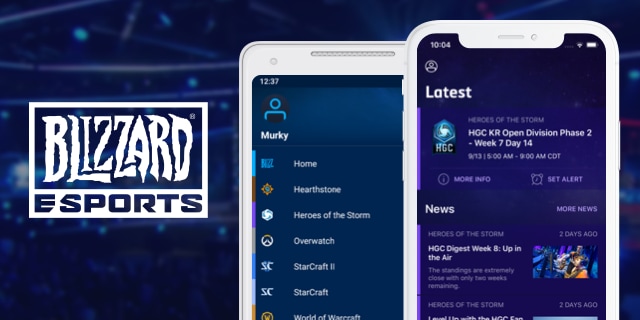 Stay abreast of the latest Heroes of the Storm esports content, scores, schedules, and more with the new Blizzard Esports Mobile App! Download it now for Android and iOS.

More testing certainly will help Frankle become accustomed to Orphea’s trait Overflowing Chaos. This trait gives Orphea one stack of Chaos every time one of her abilities damages an enemy hero. You can hold up to three stacks of Chaos in reserve, and Orphea’s next basic attack will do 50% more damage per stack, depleting the Chaos in the process. Additionally, Orphea heals herself for 100% of the damage that the empowered basic attack does, giving the Assassin a unique form of self-healing.

“The self-healing is going to be very important, but there are pros and cons compared to just dealing damage,” he said. Frankle was able to stay in fights much longer due to this extra healing, which prolonged his ability to chase heroes and finish fights. Of course, this can be punished, but only by players who recognize when Orphea dives too far.

Before heading back to prepare for Miracle’s quarterfinal match against Tempest, Frankle speculated on some heroes who might synergize well with Orphea: “Maiev or Leoric, [who have] abilities that pull other heroes in,” he said, referring to Leoric’s Entomb or Maiev’s Umbral Bind. This crowd-control helps set up combos with Orphea, allowing her to maximize damage.

Speaking of Leoric, how about the Skeleton King’s newest skin? Frankle’s face relaxed and he chuckled at the question. “I love it,” he said. “I really want to try the Janitor Leoric skin!”

Plenty of changes are coming to the Nexus, and a summary can be found on the Heroes of the Storm website. As an added bonus, all BlizzCon attendees and Virtual Ticket holders will receive Orphea for free. Be on the lookout for this mobile Assassin as she joins the Nexus on November 13!