Twelve teams battled for dominance at the Blizzard Arena in Los Angeles, CA during Opening Week, but only ten will advance to the final stage of the World of Warcraft Arena World Championship at Blizzcon. Among them are the returning back-to-back champions, Method Triforce. Boetar, Swapxy, and Fabss, along with their new teammate Blizo, seem confident and capable of winning a third consecutive championship . . . can one of the other teams stop them? We’ll find out in just a few short days, but in the meantime, read on to catch up on the Opening Week action!

With teams from North America, Europe, China, Australia, and Latin America facing off against each other, this marked the most regionally diverse Opening Week competition in World of Warcraft history. We also saw a diversity of playstyles and team compositions, with a tendency toward melee, or “cleave” comps. All classes were represented in the healing role, but most teams favored Holy Paladins and Restoration Druids. 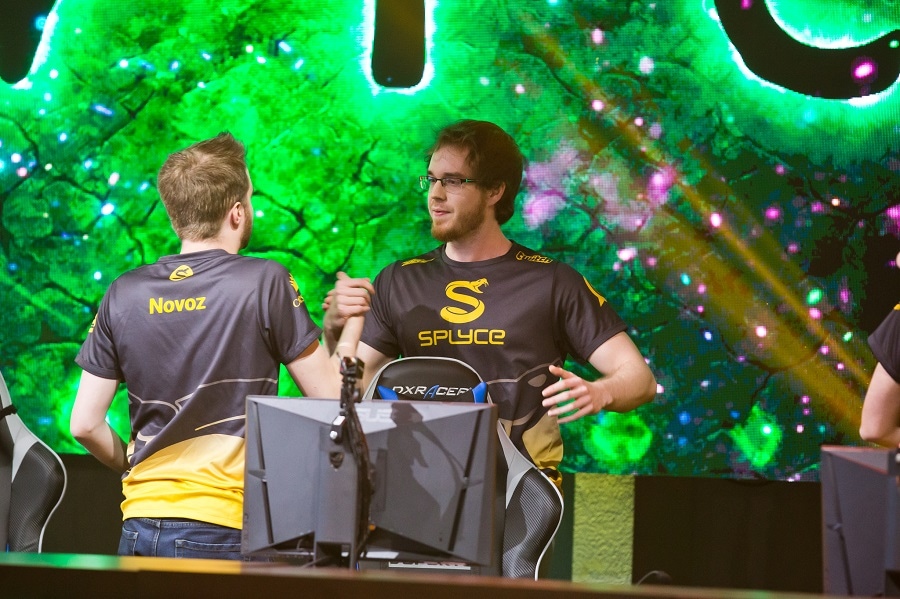 The first matchup of the day pitted China against North America as Pen and Paper took on Splyce. Pen and Paper came out of the gate swinging, taking an early 2–0 lead. In game three, however, Splyce seemed to “wake up” and ended up taking the series 3–2 with Novoz on Restoration Druid, Chunli on Windwalker monk, and Thugonomicz on Havoc Demon Hunter

Panda Global swept Grmbl 3–0 in the second Group A matchup using one of the most popular comps of the day: Thunder Cleave, an aggressive pairing of Elemental Shaman (Jellybeans) and Arms Warrior (Wallabare), plus a healer. Panda Global’s preferred healer was Rubcub as a Restoration Druid.

The Group A action continued as Method: Triforce did battle with Unitas Black, the only team from the Latin American region to make it to BlizzCon Opening Week. The defending BlizzCon champs brought their Thunder Cleave lineup, with Boetar healing as a Misweaver Monk, against Unitas Black’s LSD composition—a combination of Warlock (L), Elemental Shaman (S), and Restoration Druid (D). The pressure that Method: Triforce sustained throughout every match kept Unitas Black on the back foot, and Method swept the series 3–0 without breaking much of a sweat.

Group B kicked off with the first Australian team to ever play on a BlizzCon stage, Blank Esports, taking on Rockets: Eclipse. Blank played valiantly, but they weren’t able to gain any footing, and Rockets: Eclipse took the series 3–0.

Up next in Group B was an intense five-round match between ABC and Sneaky Snakes. Sneaky Snakes came into the match with a ton of confidence, as well as the only Discipline Priest to see play all day, and they managed to take the nail-biting series 3–2. These two teams brought an impressive variety of comps, including Jungle Cleave (Hunter, Feral Druid, Healer), Thug Cleave (Rogue, Hunter, Healer), Rogue Mage, and Cupid Cleave (Retribution Paladin, Hunter, Healer).

North America’s Method: Synergy faced off against China’s Imagine PvP in the third Group B match of the day. Method Synergy won the first round in under 15 seconds, but Imagine PvP answered with a decisive win in round two. However, Method rallied and won the next match. Game four went down to the wire after a cross kill created a 2v2 scenario, but Method fought against unfavorable odds to take the series 3–1.

The final two matches of the day were elimination matches between Unitas Black and Pen and Paper, and ABC and Imagine PvP.

Unitas Black stuck to their guns and brought out their LSD comp once again, while Pen and Paper brought their Thunder Cleave. However, Unitas apparently learned from their loss to Method: Triforce’s Thunder Cleave earlier in the day. After losing two matches, Pen and Paper swapped from Elemental Shaman to Enhance Shaman to add more pressure, and managed to win a match. Game four saw both teams using their original compositions, and Unitas Black won the series 3–1, becoming the first Latin American team to advance to the BlizzCon main stage.

In the last match of Opening Week, ABC faced Imagine PvP in a series of drawn-out matches. ABC brought an Arcane Mage, Arms Warrior, and Resto Druid to every match, and focused on outlasting their opponents. Each match in this series dragged into dampening (after five minutes, players get stacking debuff that continually reduces the amount of healing they receive), with the first game reaching a 50% healing reduction. In the end, ABC was able to win out relatively unscathed and take the lengthy series 3–0, eliminating Imagine PvP—and therefore China as a region—from the tournament.

Things are only beginning to heat up, and the World of Warcraft Arena World Championship action will resume at BlizzCon on Friday, November 3 at 12:00 p.m. PDT, as Panda Global takes on Splyce in an elimination match. Will Method: Triforce remain undefeated and win their third consecutive title? How will Unitas Black fare as the first Latin American team at BlizzCon? Find out this weekend—all matches will take place on the World of Warcraft esports stage in Hall C, and will be streaming here on BlizzCon.com.