With BlizzCon coming up next month, we wanted to take some time to spotlight the Talent Contest finalists you might see performing live on Friday evening. The next act we’re spotlighting truly rocks. Read on to learn more about Hope Diamond!

First, tell us a bit about your group and how you developed your act.

Vicki: Kristen and I are first cousins and have been writing music and performing together since we were 11 years old. After several incarnations of bands we were lucky enough to team up with Joe and Roy. Together as Hope Diamond, we performed for many years around the Detroit area and even recorded a couple of albums.

I moved to Phoenix, Arizona a few years ago, so when Kristen told me about the Talent Contest at BlizzCon, I thought that it would be a fun opportunity to perform again as Hope Diamond.

With Kristen's love for World of Warcraft and knowing that she had a great time at BlizzCon 2013, I knew she would have the inspiration to write a great song to represent the event.

I am very happy that were chosen to possibly perform at BlizzCon 2015. I look forward to reconnecting with my band members as Hope Diamond and to perform at an event that is loved by thousands. 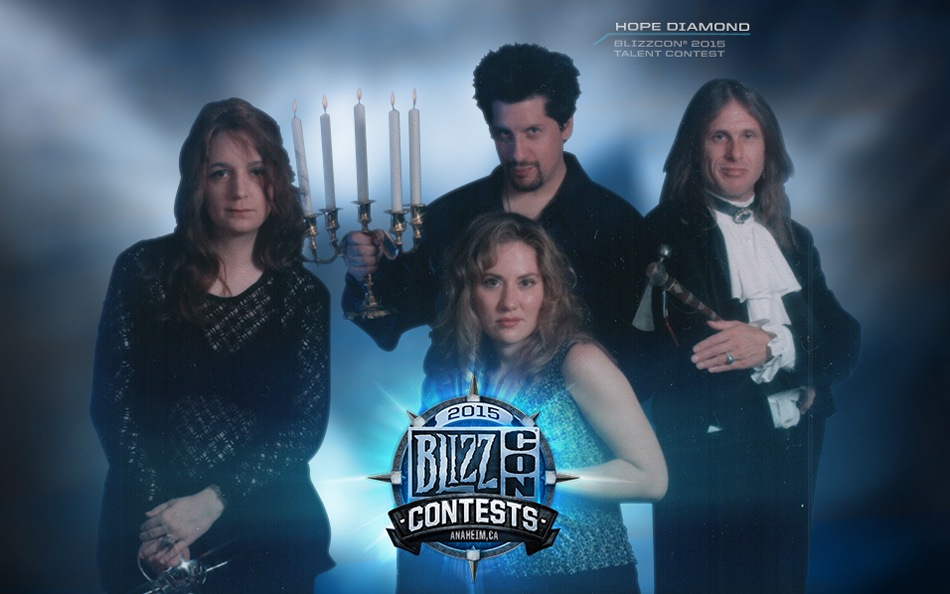 Kristen: Hope Diamond has been a family project . . . forever. My cousin and I decided to form a band about 10 minutes after I got my first guitar at 11. But real life finally got in the way, and Hope Diamond, while not officially disbanded, was moved to Hiatusville.

Until I had a rather crazy idea while playing World of Warcraft this spring. A shred of a song popped into my head and stuck there like a spike. And the more I thought about it, the more both the song and the crazy plan took shape. The BlizzCon Talent Contest! Of course! I would write the song, submit it, and see what happened. Because how awesome would that be, to be selected? If nothing else, it would be a blast just giving it a try.

This decided I got busy tracking down Joe and Roy. I was certain Vicki would help, but I didn't want to bother her over in Arizona until I knew I had a full Hope Diamond on board. To my pleased surprise, all three said "sure thing!" They aren't gamers, but they all believed enough in my quest to reach Geek Valhalla to give it a try.

So . . . this is actually a big reunion performance for Hope Diamond! We are so honored and excited to have this opportunity; we cannot thank you enough.

Where is everyone from?

All four of us are from the Metro Detroit area. Vicki from Sterling Heights, Kristen and Joe from Warren, and Roy from Southgate. (Note: Not South Gate—Roy is not dwarven!)

Which Blizzard games is everyone currently playing?

Kristen: I am the only gamer of the four of us. But I think I more than make up for those slackers! I've been playing World of Warcraft since January, 2005—with no sub lapses!—as well as Heroes of the Storm since alpha, Hearthstone since beta, and Diablo since the first one.

How have Blizzard’s games inspired your act?

Kristen: I am a diehard WoW lore nerd—I say that proudly. It's hard to not be inspired by the wealth of storylines presented within Blizzard games. As for faction pride, I'm Alliance from top to bottom—but I have a well-known affection for the darker side of the Light. For Lordaeron!  For the High General! Woo!

You can find out more about Hope Diamond on Facebook, Twitter, and Spotify—check the links out below!